NOTE:     This blog has no ads and I'm not beholden to hotels, cruise lines, tour companies or airlines, and that's why I can offer my readers the truth about all of the above + offer the many ways to enjoy comfort traveling for less 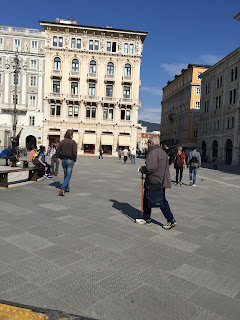 In yet another way there is a unique dimension to my most recent travel experience—as I discovered when I visited the Italian city of Trieste, Austria’s Emperor Franz Joseph had some radical ideas, for instance, the Emperor’s conceptual ontological belief placed him in direct opposition to the Catholic church when Franz Joseph’s 19th century edict banned any religious edifices to be built in the city public squares.
Trieste was an Austrian city in 1911, but after WWI when the city became part of Italy the tradition of open public squares for all was still part of the city’s ethos—as it was during WWII when the warring sides based spies in this city, and in the many years of the cold war East & West traded information and hostages.
In 2017, this is still a tranquil city that continues to be open to all religions, beliefs and inclinations, still a truly egalitarian city where LGBT and everything in-between coexist in large open public spaces reflective of an architecture embodying a noble ethic with solid structures built along the waterside replete with boats large and small moored astride the main thoroughfare.
As I was walking through the city I had the impression that everyone who participated in the city’s economy, thoroughly enjoys being part of the strata mix of upscale with hard working class folk who staff the local hotels and restaurants and maintain the city’s port and public thoroughfares, and they too are participating when lunching at the many street side cafes offering egalitarian prices for upscale menus.

Travelers will also find Trieste is a city where shopping is an egalitarian sport, not only featuring 5* clothing made of Italian woven materials and manufactured in Italy by family run factories, but 5* bargains at the Tezenis  underwear store at Piazza della Borsa selling so much more than guys and gals underwear at Walmart prices—the pants and everything in-between is manufactured in China, but with the quality control demanded by Eurozone standards.
I can attest to the fact that the underwear I bought at Tezenis would only be available at a boutique store in the USA where prices are astronomical, sadly the chain maintains stores in Spain and Portugal, but not in the USA.
The stores like Arthur Davies at Via del Teatro 4/b sell the 5* quality and uniquely styled Italian made clothing that will make you a fashionista back home at prices that are unbelievably affordable.

If you decide to visit the uniquely egalitarian Trieste, I think you’ll agree that this is where comfortable travel for less $ is a reality, as for me, the more than I could have imagined remains in my memory available on those days when the winter doldrums strike. 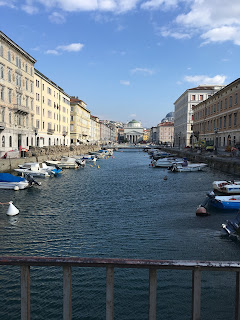 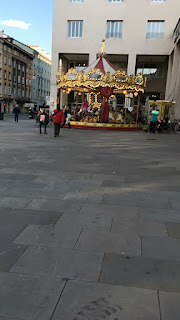